Today I'm starting a game analysis feature called Dissecting the First Screen  taking a look at the first "screen" of gameplay and everything else that leads up to that first screen. For now I'm going to start with mostly older games as they are figuratively and quite literally easier to describe in terms of the first screen of gameplay. We'll start with Zelda on the NES since the term "First Screen of gameplay" is quite literal when it comes to this game. We'll talk about the very first screens up until you get the sword which represents the "crossing the threshold" in most Zelda games.

The very first Zelda game for NES says a lot about Console Game Design in the 80s. Many games nowadays try to establish an elaborate narrative as soon as you start playing the game. Back then the bulk of the plot, descriptions, and flavor text was confined to the booklet since the limitations of the NES didn't allow for long cutscenes of exposition. All you get is a short overview at the title screen and a list of all the items. However after the naming screen you're thrown into the world without any explanation during this time. That means if you didn't have the book or didn't watch the little scenes during the title then you have no idea what's going on.

Now getting back to the whole, "when I get the sword" spiel. We'll count the time it takes to get your sword from the first moment that you control Link to the moment you get it in your inventory.

Alright the first thing that happens if you're dropped into the overworld. There are no inherent threats in this screen. This is important because the player needs to know how get comfortable with the controls and being a kid in the 80s the best way to do that was to just press all the buttons. You have 4 possible destinations, lets say I don't go into the cave first. The idea to get across here is that Link, I the player, have no means of defense from enemies. As the designer I don't prevent you from going into danger unarmed because I feel that by letting you put yourself in that situation it creates a stronger emotion from an effect that was caused by the player.

Just to break it down I introduced 2 big major concepts to the player.

What I mean by that is that you, the player, were left in a safe area by me, the designer. I did not force you out of your comfort zone, but because of a choice that you decided to make by going through one of the 3 paths you now know the consequences of actions exist in the context in reality (the game). We never think about this anymore because we have seen, done, heard, joked, and experienced this first screen countless times over the past years that we go, well duh of course I need to go into the cave to get the sword that's a no brainer. Well back in 1986 when you were a kid (probably) without any context, seeing this screen for the first time, there's just is no explanation for what's going to happen or how you get the sword in game.

You may think that, wow this game was pretty unfair right? Well no because you see, back then games and these things called instruction booklets that were actually useful and interesting to look at.

The Legend of Zelda is what's commonly referred to as a Nintendo Power Game. The term describes a game that would usually contain rather cryptic puzzle or event that was very hard for the player to figure out with getting the strategy guide or getting a Nintendo Power magazine. Some games were notorious for being completely unplayable without the aid of a guide (see: Milon's Secret Castle).
Some may argue that the inclusion of a mini guide within the booklet itself is due to a lack of direction in the overall level design but I say nay because again the very first screen has points of interest that are specifically design to draw the player in. 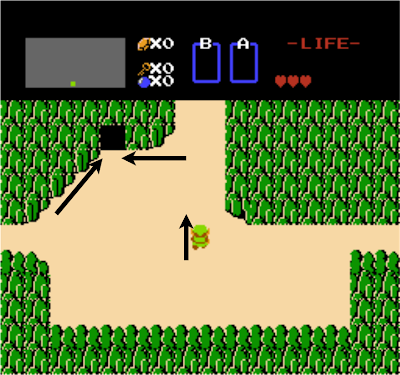 Now first of think about the direction that Link is facing in. Why isn't Link facing towards the screen? Normally when games want you to identify with the character they would show you the character's face first above everything else. In this case however the face that link is facing up serves a very important purpose. In terms of 2D design the direction that link is pointing in creates an "invisible arrow" pointing towards the top of the screen, and that's only the beginning. Now take a look around Link, the design of the level is composed of hard 90 degree angles all except for one area. The top left hand corner of the screen contains an obtuse angle that sort of "points" towards the cave. So, besides standing out because it's different from everything else. The game designers have created so emphasis on the cave it has the most dominant presence in the first map screen.


So when it comes down to it. The first screen and first few minutes of the game is a very well designed. By creating a strong draw towards the cave the player will most likely get the sword and will be well on their way to saving the Kingdom of Hyrule, or not and just beat the entire game without it.

New home for all of my future games!

Want to get in touch?

Drop me an Email or check out my profile.

A Collection of Game History, Culture, and More